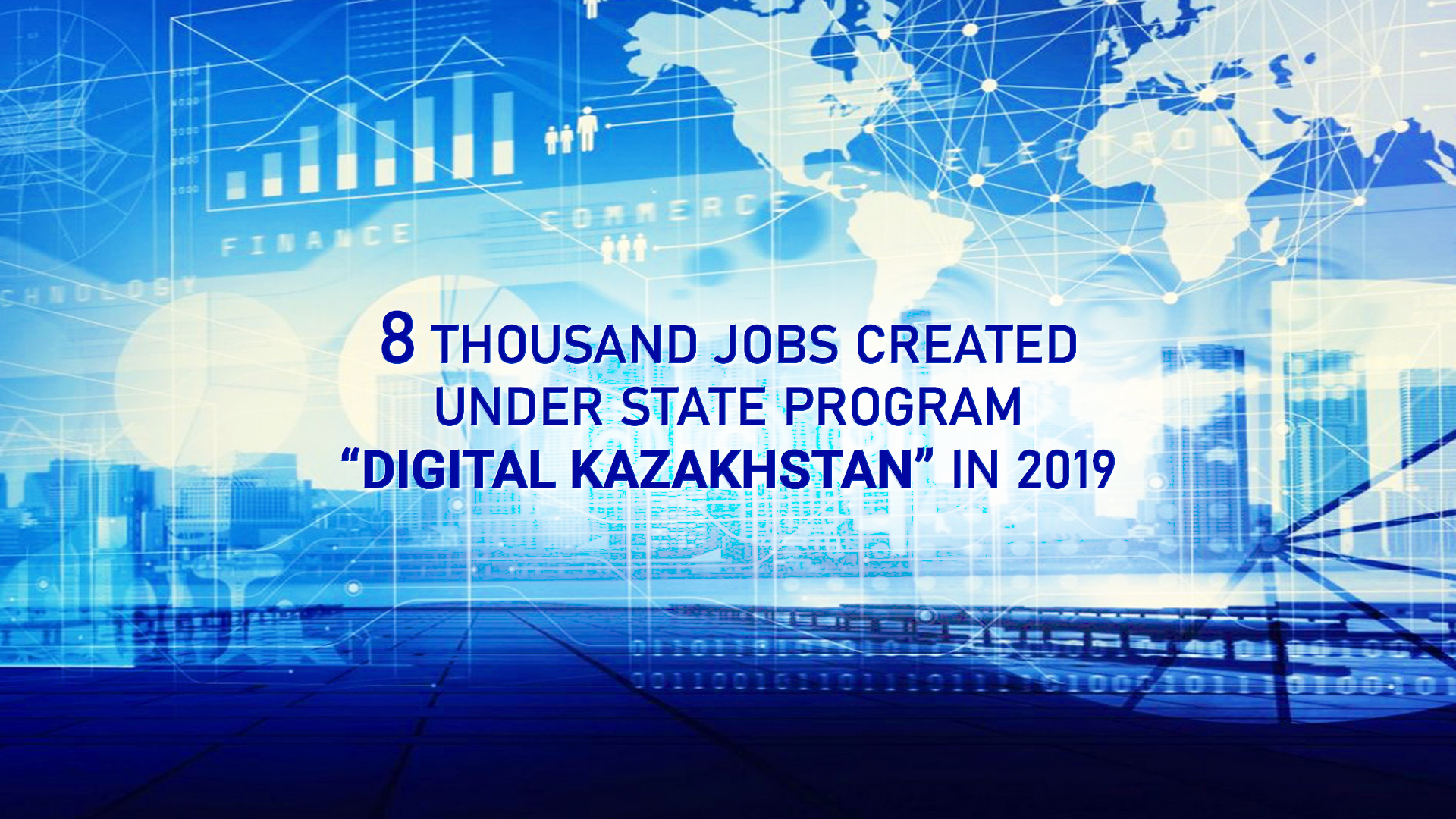 At present, the growing relevance of digitalization of the Kazakhstani economy will ensure further economic growth and competitiveness of the country on the world stage. The main tool in achieving this goal is the State Program “Digital Kazakhstan.” 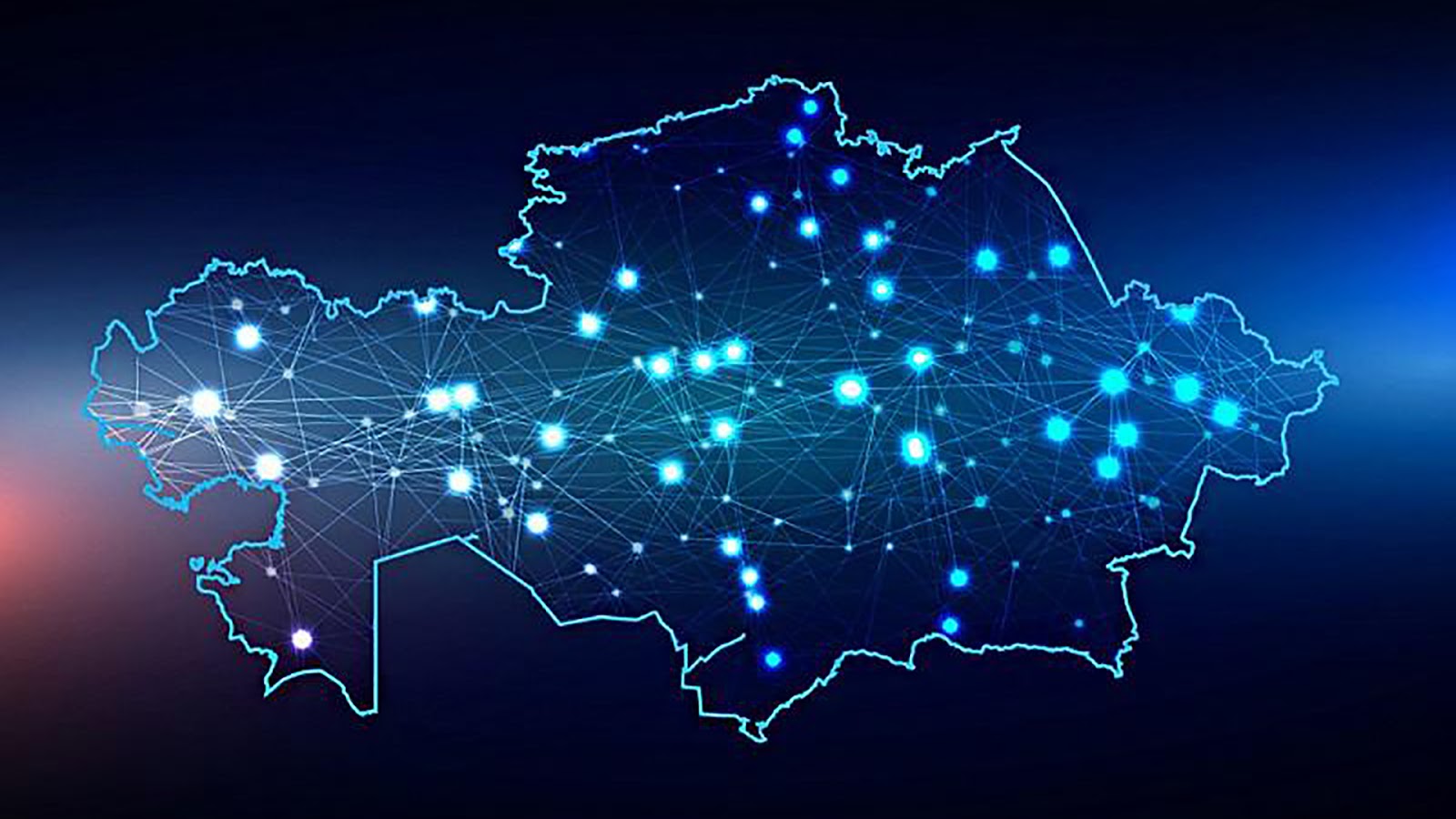 The total economic effect of the program for 2018 and 2019 exceeded 600 billion tenge. Significant successes have been achieved in the implementation of digital technologies in the provision of public services, education, healthcare, the financial, transport and mining and metallurgical sectors.

Further integration of digital technologies is crucial for Kazakhstan to be included in the list of 30 most competitive economies in the world and to improve the welfare of Kazakhstanis.

In terms of digitalization of the social and labor sphere, the electronic labor exchange is successfully functioning. As a result, the employment process was halved, and the procedure itself became transparent.

In 2019, more than 488 thousand job seekers were employed through the electronic labor exchange, of which 350 thousand were employed in permanent jobs. 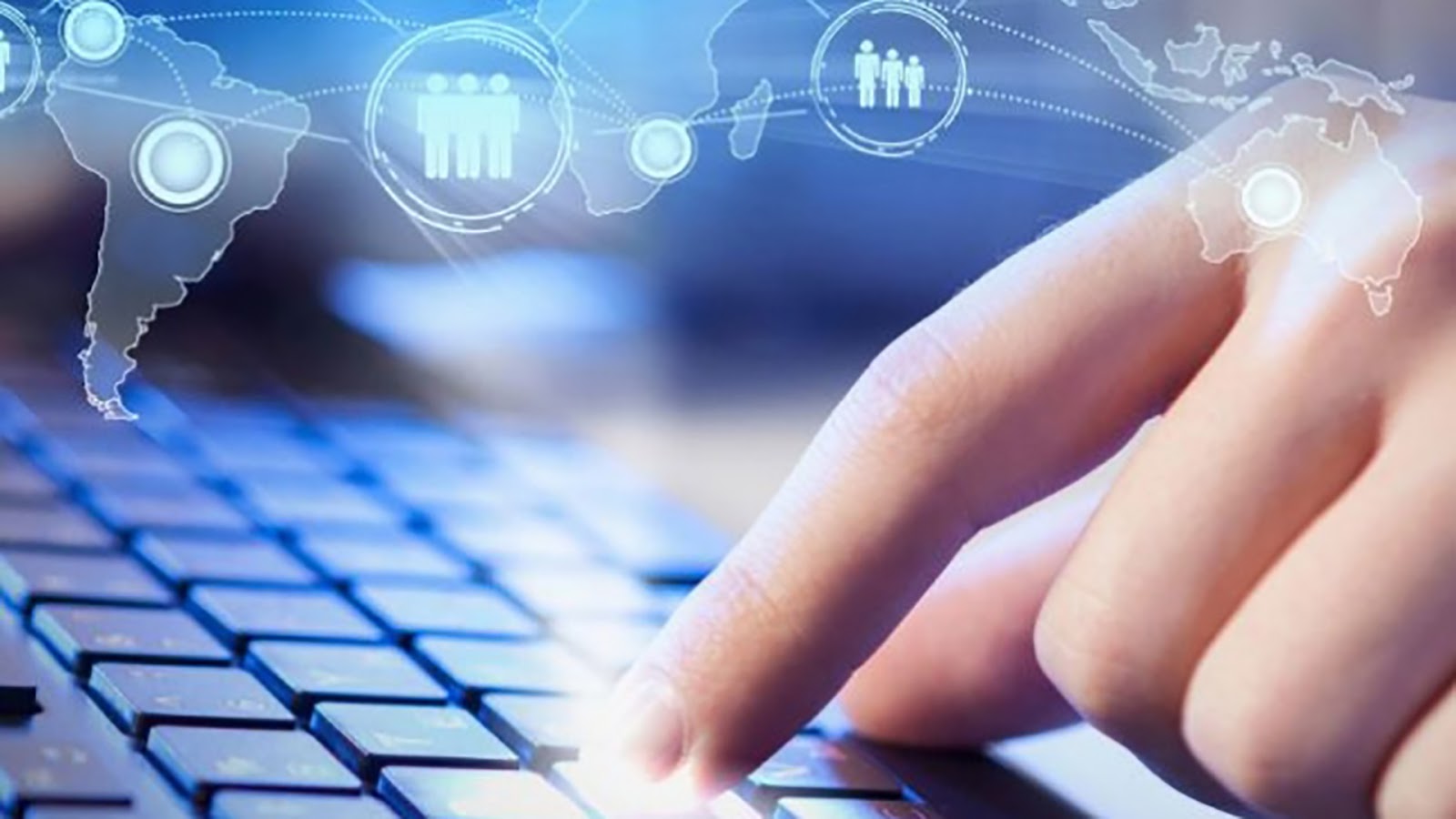 Thanks to the implementation of digital projects, employers and job seekers saved about 862.2 million tenge. Cost savings when using the Unified system of accounting for labor contracts amounted to 292.4 million tenge.

As part of the Digitalization of Economic Sectors trend, digital technologies are being introduced at the enterprises of the fuel and energy and mining and metallurgical complexes, where the technological re-equipment of industrial enterprises is carried out using elements of Industry 4.0.

In the oil and gas industry, a transition to a 3-year overhaul period was carried out at the Atyrau and Pavlodar petrochemical plants, which allowed to reduce repair costs and increase the processing volume by an average of 300 thousand tons per year by reducing downtime and stops for overhauls.

The introduction of this technology allows optimizing the cost of electricity consumption up to 15%, stabilizing the production level up to 2%, and also provides centralized management and remote monitoring of fields, optimization of well operations and production equipment. 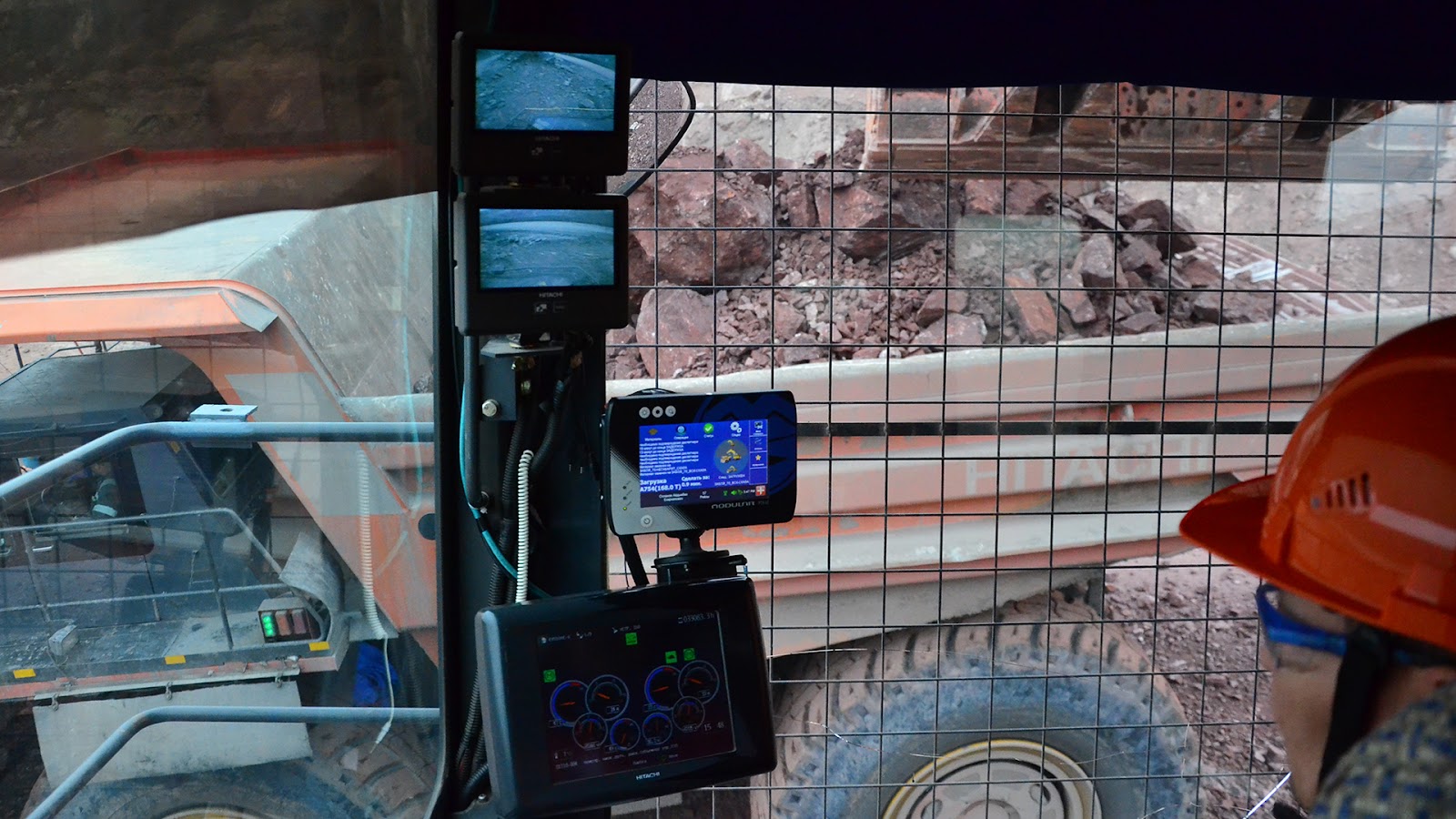 To improve the safety of train traffic due to the timely detection of track faults and rail defects, the project Introduction of “Magistral" Automated Management System is being implemented. At the moment, the diagnosis of trunk network infrastructure is carried out by 3 units of mobile diagnostic systems. It is also planned to create additional three mobile diagnostic systems.

According to the results of the work of mobile diagnostic systems for the 4th quarter of 2019, about 19,000 km of track were diagnosed. At the same time, more than 190 kilometers were identified with a poor rating. Found about 85 pcs. of dangerous sharply defective rails, that is 85 places of breaks of rails are prevented.

In terms of digitalization of transport and logistics, the Intelligent Transport System project is being implemented, which collects and processes data on roads, vehicles, toll roads, passengers on intercity buses, as well as on tickets issued. 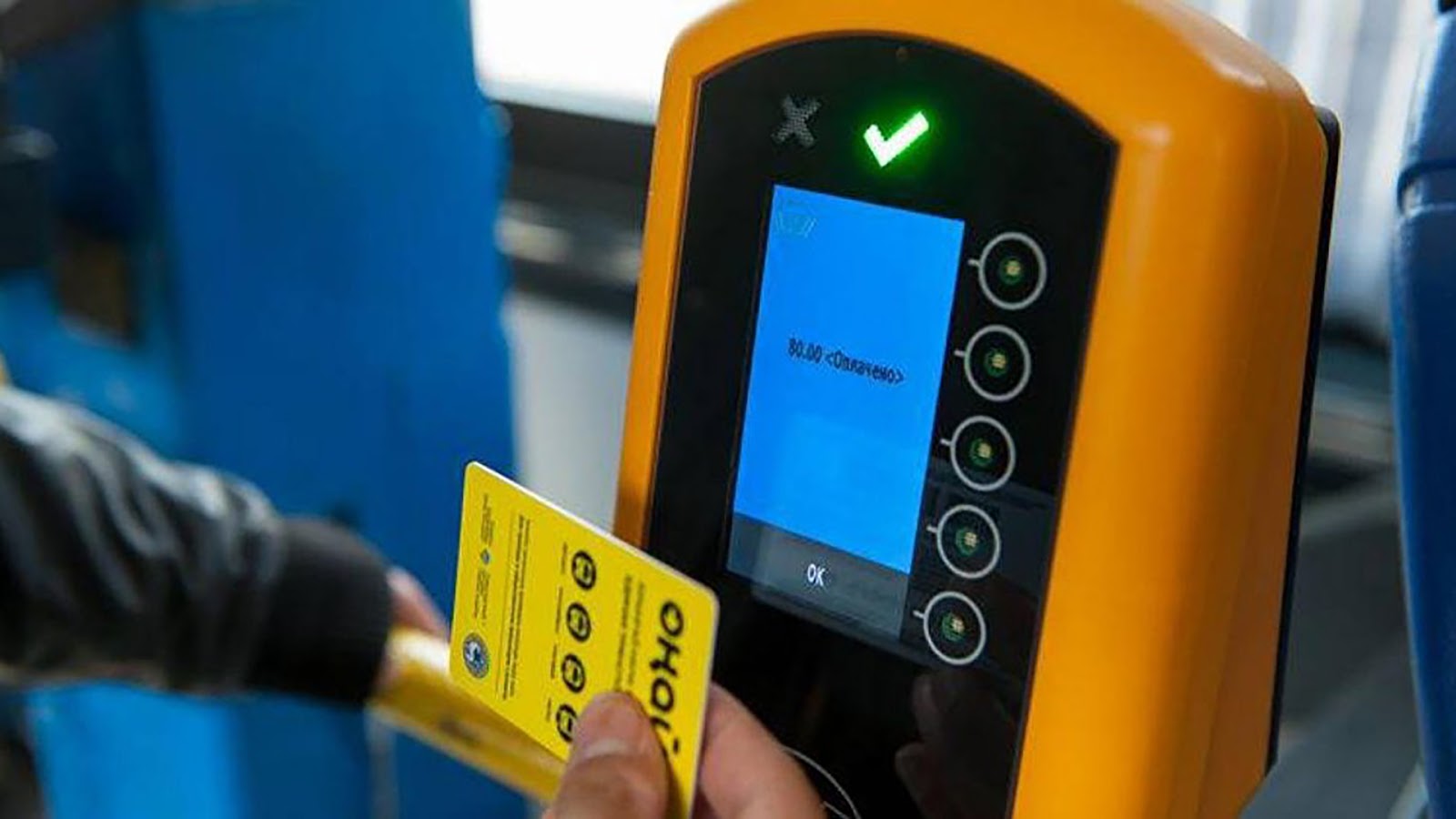 One of the components of the Intelligent Transport System is a toll system, as well as a system for collecting and providing traffic information to road users.

To date, a charging system has been put into operation in three sections: Almaty-Kapchagay (42 km), Almaty-Khorgos (295 km) and Astana-Temirtau (134 km) with a total length of 471 km.

To automate transport control, 24 special automated measuring instruments have been introduced, with the help of which, since September 2019, 82 violations of weight parameters have been identified and about 8.6 million tenge have been recovered in the form of fees and fines.

As part of industrial digitalization, a project is underway to create model digital factories that will demonstrate the effect and impact of digitalization, identify barriers and develop state support tools. Implementation of 51 projects was initiated, of which 16 projects were completed.

Today, Astana Hub has created conditions for obtaining tax, labor and visa benefits, and there are startup development programs.

In total, today the technopark already includes 163 IT companies, about 700 startups, 17 R&D centers of domestic and foreign IT companies (such as CISCO, NOKIA, IBM, Microsoft and others), the Alem programming school according to the modern international teaching methodology. The share of local content was 57.7%. 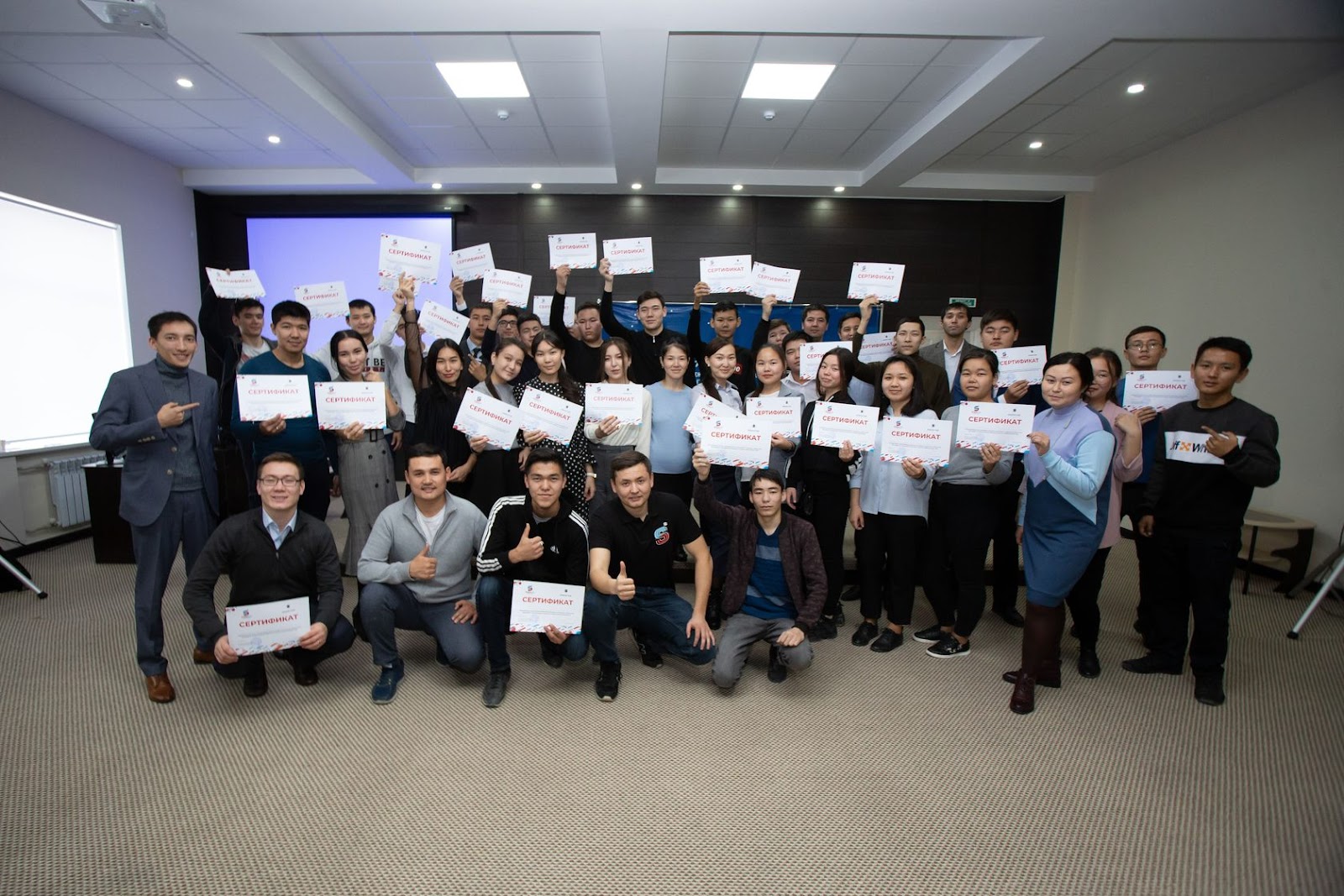 Over 530 events were held at the Astana Hub in 2019, in which almost 17 thousand visitors took part.

In 2019, memorandums of cooperation were signed with 25 international organizations in the framework of the development of innovative interaction.

These measures helped create favorable conditions for the development of startup culture and attract more than 18 billion tenge in 2019 in domestic startup projects. The total volume of attracted investments in the IT market of Kazakhstan over the past 2 years amounted to about 32.4 billion tenge.

“The programs of our technology park gave us the opportunity to understand how good Kazakhstan's startup projects are and how rapidly they are moving towards the level of a developed international startup ecosystem. After examining the quality of our projects, we can conclude that our investment in them paid off,” said Joseph Ziegler, director general of the International Technology Park of IT-startups Astana Hub.

At the next stage, in accordance with the task of the Head of State, it is planned to actively involve regional objects of innovation infrastructure in the Astana Hub ecosystem - technology parks, incubators, accelerators, innovation centers, IT hubs, startup academies, commercialization offices, universities, research institutes, etc.

The measures taken will ensure the preparation of innovative projects at the pre-seed stage in the regions themselves for further participation in the Astana Hub programs at the national level and cooperation with international partners.

Currently, the applicants are 17 proactive and 21 composite public services. The optimization carried out reduced the average package of documents by 30%, as well as the term for the provision of public services — an average of 3 times.

Automation of public services has already reduced paperwork by 70.8 million documents and gives an indirect economic effect of more than 8.4 billion tenge.

As part of the digitalization of healthcare, 97.5% of organizations are equipped with computer equipment and 100% are connected to the Internet. 17.9 million (95.7%) of Kazakhstan residents have regional electronic health passports.

The measures taken have improved the quality of health care services for the population, as well as facilitate the work of doctors.

Due to pre-registration through electronic services, “live” queues in polyclinics were reduced by 30%, which halved the time spent by patients in polyclinics. 1.8 times (from 7 to 4 hours) reduced the time to obtain research results.

The time of doctors and patients was reduced by 45% due to the reduction in the average patient service time, the ambulance was optimized: the processing time for calls to the control room was reduced by 26%, and as a result, the waiting time for ambulances arrived. 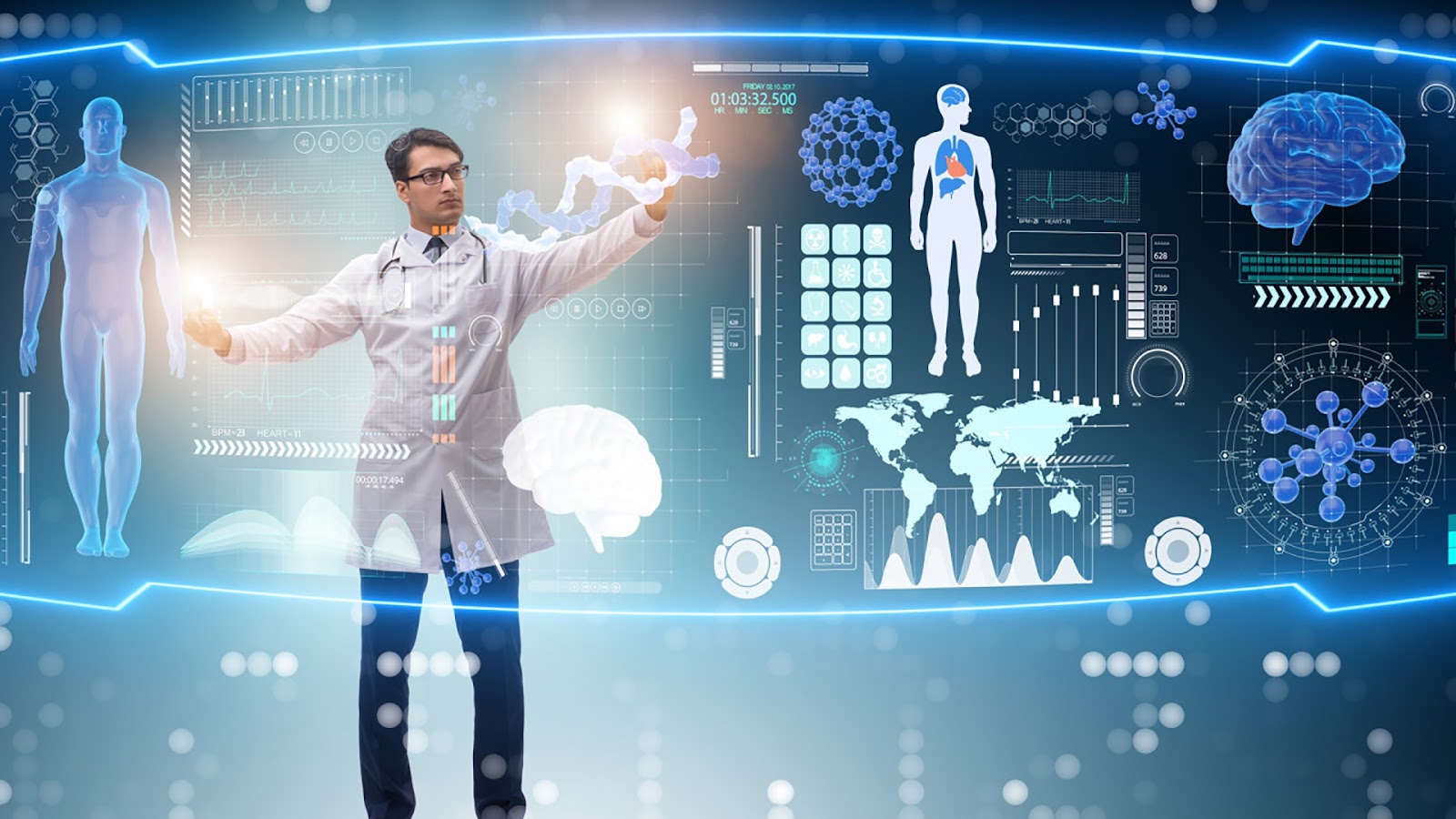 Also, work will continue to introduce medical information systems to the village level and bring the level of electronic health passports to 100%.

As part of the digitalization of education, schools are equipped with computer technology. Pupils use electronic diaries and journals (6,703 out of 7,014 schools). 90% of schools (6336 schools) are provided with Internet at a speed of 4 Mbit / s and higher.

In 78.5% of kindergartens, electronic queuing has been introduced, 70.3% of schools accept students online. 74% of public education services are automated. 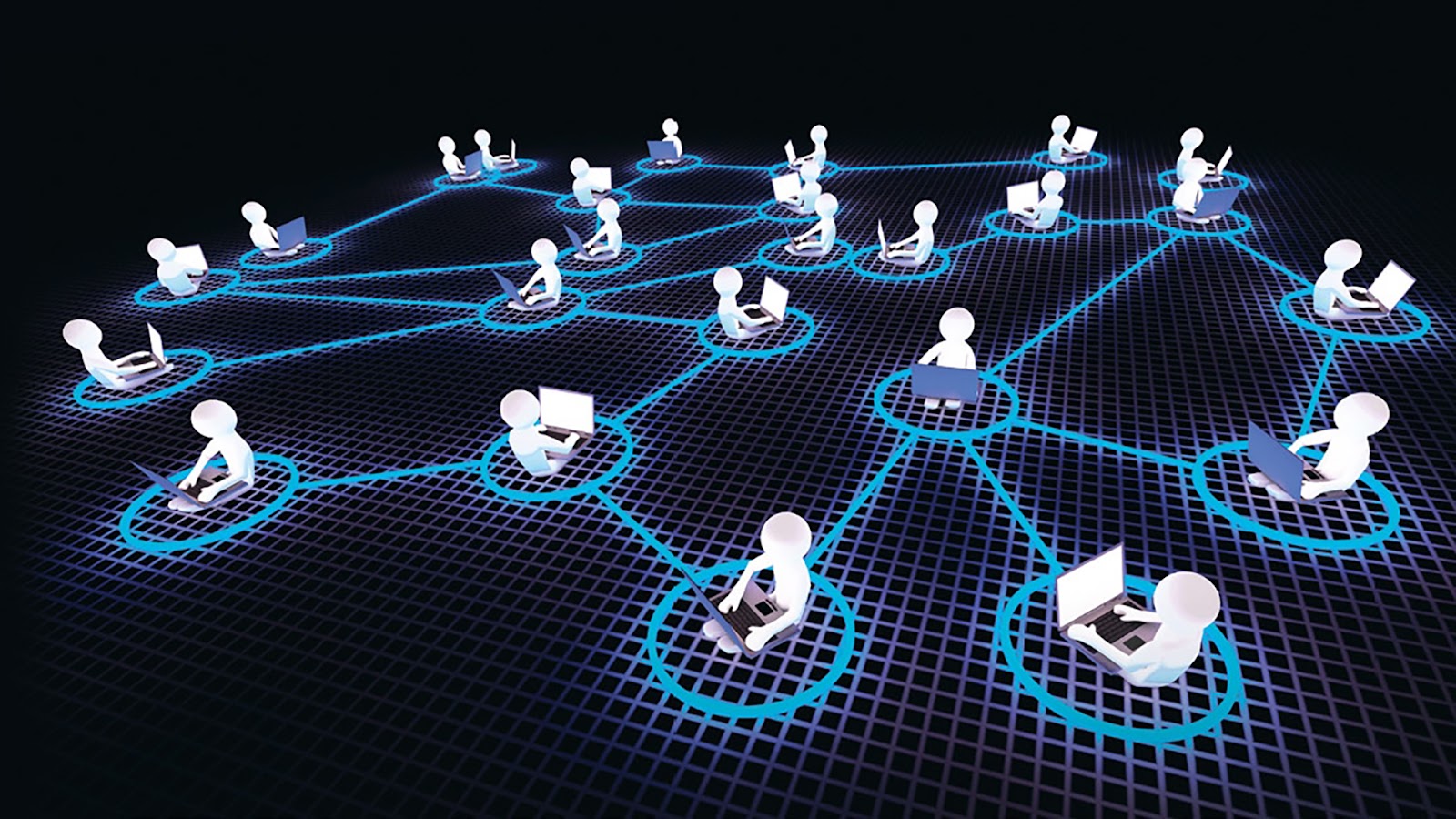 In general, the digitalization of the education system has reduced the gap in the quality of education between rural and urban schools by more than 30%.

As part of the state program, much attention is paid to supporting SMEs and creating favorable conditions for small and medium-sized businesses.

The system of Electronic invoices, Labeling of goods were implemented, which also allows to improve the terms for business and to identify the shadow economy. Starting Jan. 1, 2019, all VAT payers use electronic invoices.

Also today, 540 thousand cash registers are used, of which 95% are connected online.

This will allow providing access to high-speed Internet to 3,718 government agencies and budget organizations. At the same time, when compiling a list of rural settlements, the list was sent for approval to local executive bodies. The constructed infrastructure stimulates the development of mobile operators. The total length of the FOCL will be more than 20 thousand km.

In addition, according to the results of the 3rd quarter of 2019, 841 state bodies and a budget institution located in 299 villages were connected. Further access to broadband access will be provided in accordance with the connection schedule in accordance with PPP agreements. 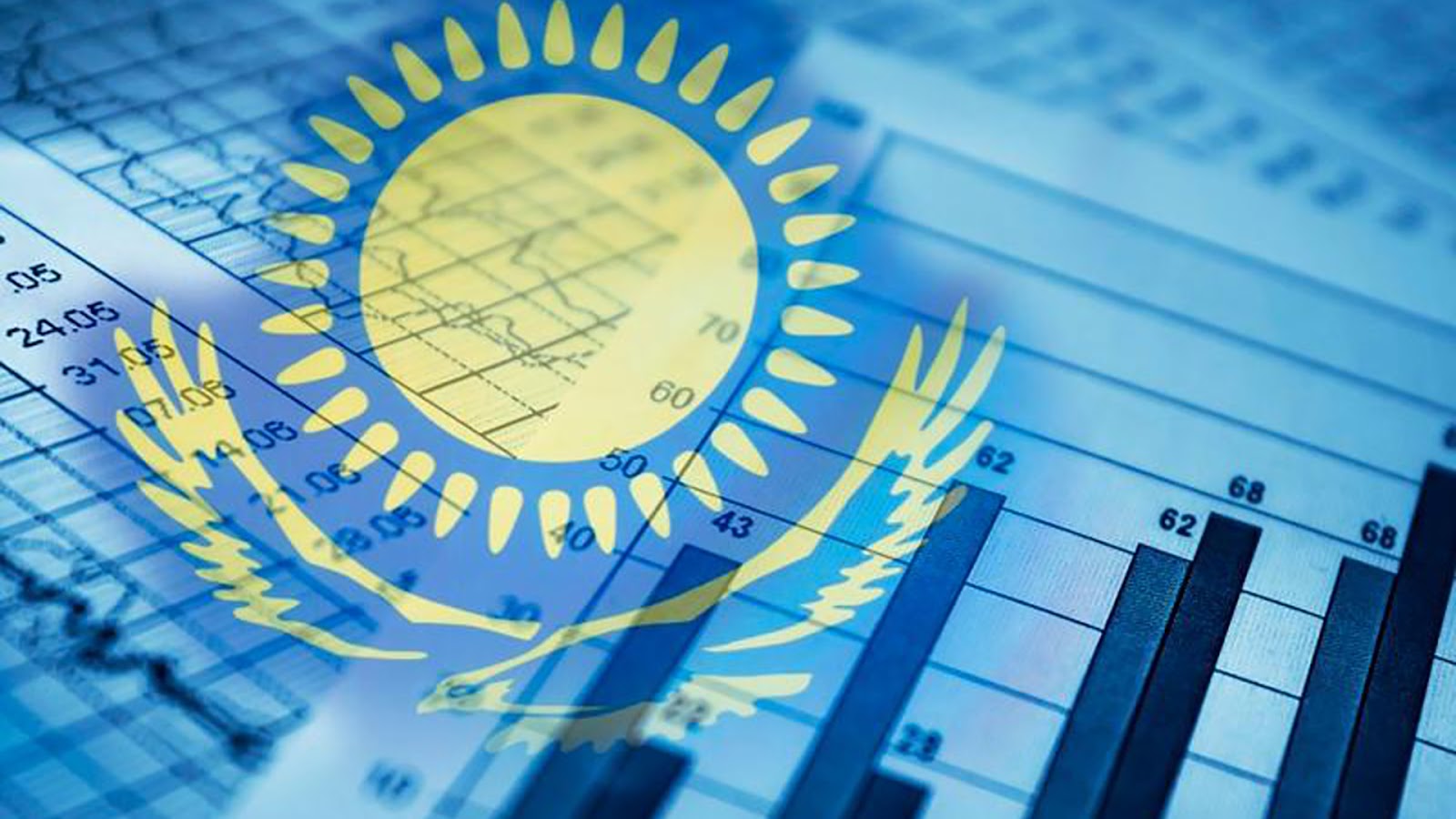 According to the results of 2018, 10 target indicators and 20 indicators, including place of the country in various international rankings. So, in 2018, the country's position improved in terms of the Global Cyber ​​Security Index of the International Telecommunication Union. According to the report of the International Telecommunication Union, Kazakhstan took 40th place in the Global Cybersecurity Index 2018/2019, rising by 42 points compared to last year's rating (82nd place).

When compiling the rating, five main criteria are taken into account: the legislative framework, technical and organizational measures, activities in the international arena and the creation of potential for the development of the sphere.

In 2018, the country improved its position in the WEF CEC rating by the indicator “Availability of venture capital”. Kazakhstan took 90th place on this index, rising 12 points compared to last year's rating (102nd place).

This year, the total number of people trained in digital literacy amounted to 532 thousand citizens (with a plan of 466,846 people).

In addition, about 78.3 thousand citizens from socially vulnerable sectors of the population were trained in digital literacy.